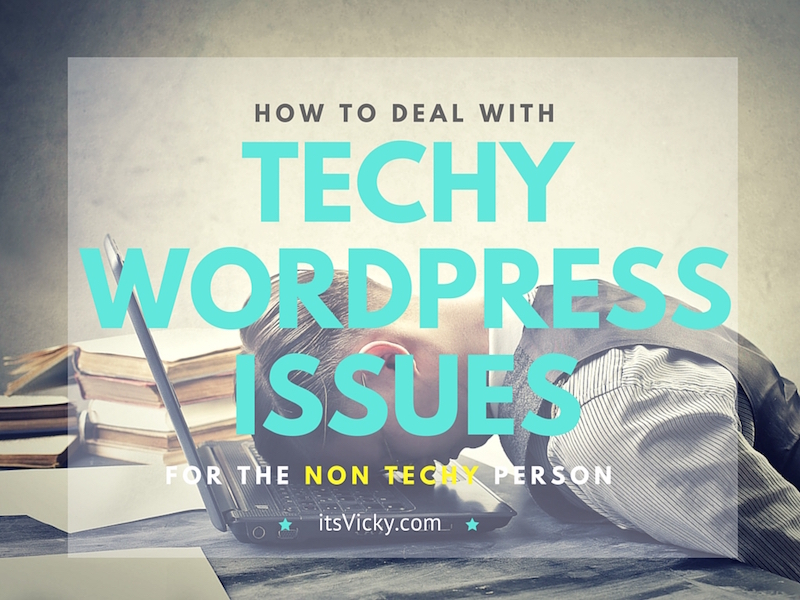 One morning a couple of months ago, I logged into one of my WordPress sites. I was just going to add a few new posts from my writer. I thought I would have it all done within an hour.

This is a site that I don`t do much with but it has good traffic, it brings in money and I just keep it fresh and up to date with outsourced content. (It’s NOT this site).

I had no problems logging in. But when I go to look at my posts I receive an error message. I can not access posts, pages or any media. Can’t access images and my content.

Yes, I freaked out a little bit, but I`ve also been doing it long enough to know that somehow it will be fixed.

So when something like this happens, and I know it’s not always easy BUT…

To be honest, the question is not IF you will have any issues with your WordPress site the question is WHEN it will happen. There`s a lot of techie stuff in the background and a lot of things that can go wrong.

I`m not here to discourage you at all. I`m here to encourage you, to stay positive even when things get rough.

It’s when things like this happen, that the committed marketer pushes through…

So how do you deal with an issue like this?

I am NOT a tech person, sure I understand basic HTML but that`s as far as it goes. When it comes to coding and files I rather just stay out of it.

Good Reviews – Make sure they have plenty of good reviews. You want to make sure it`s not just Uncle Jeff and their brother that left a 5-star rating.

Communicate – With a tech issue like the one I`m dealing with, I contacted a few people on Fiverr, discussed my problem and heard what they had to say about it. I got a lot of replies and went with the one I felt best suitable.

I paid a lot more than $5 for this Fiverr gig.

Find the Right Person – After many messages back and forth, where the person I hired on Fiverr only wanted one thing, to get paid… without delivering any sort of result. I decided to cancel the job and got my money back.

My experience here is if the problem is too complex don’t waste your time on Fiverr. Find a professional that can do it right from the beginning.

I needed help and I needed it desperately. I got lucky (or so I thought) one of my writers over at UpWork former oDesk, happens to be a programmer and tech guy. He took on the job to fix my site.

It turned out that my site had been hacked. Somebody had hacked into my site. They were taking advantage of my traffic, stealing the money I was supposed to make…

My UpWork friend spends hours and hours fixing the site. When we thought it was all good and taken care of…

And if that’s not enough, it now turns out that Google looks at my site as hacked and infected so they slam a big warning sign on it.

If you would have landed on the site there was a big Virus warning, ugh.

Just want to make sure you know it was NOT THIS SITE.

To be honest, at this point I felt like giving up…

I was almost ready to through in the towel on this site… but knowing that it got around 30 K visitors and was making me some decent money, kept me going.

What we decided to do at that point was to move the site to another host on a VPS. Some of the other sites that had little traffic and no sales I just deleted.

In this whole transferring process my oDesk guy that has been writing for me for months, just disappear. I had to make some hosting decisions with the site and needed help with that, he had also said that he would transfer the site, but there was no way for me to get hold of him.

Ugh, outsourcing to people you can’t trust throws you back and it’s a real time hog. At this time I was just pushing through anything that came my way.

I decided to pay the hosting company to move the site. Had to pay another fee to make sure all the virus and hacked files were gone, but the site got moved…

I still had problems accessing things from WordPress, so here we go again I had to hire another guy on UpWork to finish up the job.

Found a great guy that could fix the final issues for me.

It was a LONG process!

Even though the site was fixed I still had Google to deal with.

One word of advice makes sure you have Google Webmaster tools set up with your site.

This is where I could ”redeem” the site. This is where Google gave me a one shot deal to explain to them what happened to the site and how it was fixed.

When I knew that the site was 100% secure, I wrote Google via Google Webmaster tools and explained what happened.

After a day or so they responded, the warning was removed and the site was back to ”normal”.

I was so relieved!!

It has now been a couple of months or so, and knock on wood my rankings has been pretty steady.

The only reason I’m telling you this is that we all get into this kind of situations if you push through it great things are to come.

We all run into problems and issues, it’s how you deal with them that defines the future

Things to Think About… a Head of Time

How to Deal with Techy WordPress Issues for the Non-Techy Person, what’s your take on this? Share with us below, please.