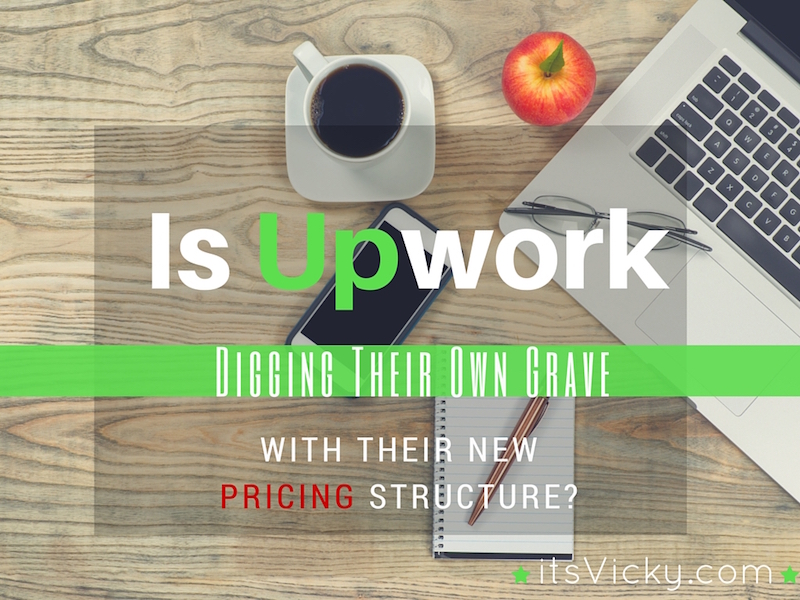 There’s been a lot of talk about the new pricing structure that Upwork is launching here in June. UpWork, an online community that connects clients with freelancers, has stirred the pot with the new changes.

“Greedy” and “abuse of power” are just two things I’ve seen in the Upwork chat that address the issue.

The “abuse of power” I’m sure relates to that oDesk and Elance merged a while back. oDesk then became Upwork and are now dominating the space.

With Upwork we saw changes in design and layout. We also saw changes for the freelancers having to pay to apply for more jobs. Monthly membership fees were installed and now this… the new pricing structure.

Starting June 21 affecting both freelance workers and clients, the new pricing structure will be in place.

For the Freelancers, this means a sliding fee structure instead of the set 10% fee. In the past, if you got a job as a freelancer for $100 you would pay $10 in Upwork fee.

The new sliding structure means higher fees initially for freelancers. Starting at whopping 20% for the first $500 earned with a client. This number will decrease the more the freelancer earns with the same client. The problem is that some jobs only require short term commitments and those freelancers will be stuck with a 20% fee. The purpose of the sliding fee structure is to encourage long term work. Not all jobs fit that “explanation” though.

This is the new price structure for freelancers:

For the Clients that has been paying no fee previously now have two options.

For some this can be a real turn off, I see that.

What does the new Upwork pricing structure mean for a $100 job?

Upwork is making good money for providing the platform.

These new changes are making people upset, rightfully so maybe…

I use Upwork to hire my writers and for me the fee is not enough to go elsewhere… yet..

I see many freelancers being upset, comments like these are not uncommon…

20% upwork fees will force many freelancers to withdraw

They will be getting no more money out of me at all unless I am, literally, starving.  Ever since merging Elance and Odesk this place has gone down hill.

Stephane Kasriel, CEO of Upwork, has responded  in an email saying…

This is a change and people are voicing their opinions, but we’re confident that our new pricing model is the right decision for Upwork’s community overall.

What do you think?

There is a petition going on that you can sign over at change.org called:

Stop Upwork from screwing over its freelancers.

I’m sure these changes will go through no matter what. The question is, is this the first step of many of raising the fees for both freelancers and clients over at Upwork?

I guess only the future can tell.

Are you a client or freelancer at Upwork? Is Upwork Digging Their Own Grave with The New Pricing Structure?

What do you think of the Upwork changes, please let us know with a comment below