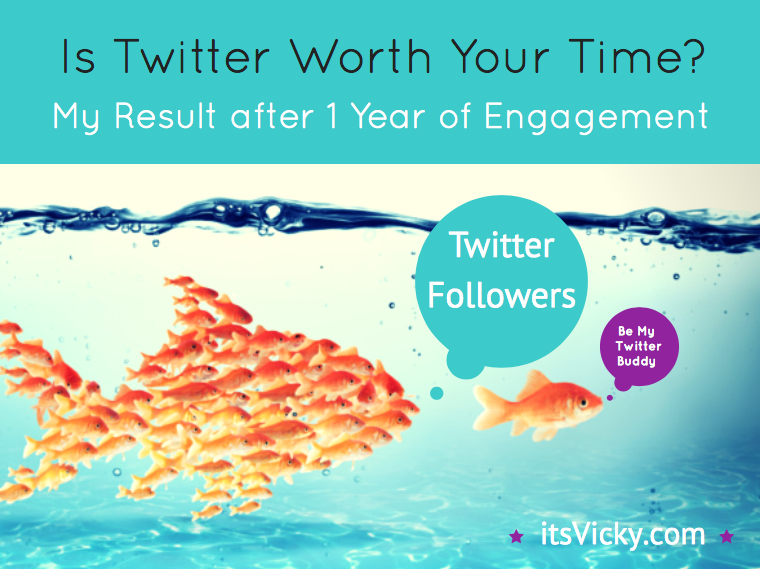 Looking at my Twitter stats, for the last year I see some pretty impressive numbers…

Those numbers are nothing compared to the overall picture of Twitter.

Pretty impressive numbers, I can definitely see the potential.

Let’s get back to engaging.  When I say “engaging on Twitter” you might wonder what I mean by that. Let me clarify.

Before I started using Twitter, I didn’t really “get it”. Hashtag this hashtag that… but I knew others were receiving traffic to their blogs so I wanted to give it a go. There are obviously millions of people to engage with and breaking news happening daily.

I can say that I spent hours giving Twitter a real honest shot.

What I wanted to do was increase awareness of the itsVicky.com brand and blog. I also wanted to add Twitter as another traffic stream.

So what is the outcome? Does Twitter generate traffic to your site?

The traffic I got from Twitter last year was 7488 visits, each visit was an average of 1 minute and 45 seconds.

I got a few sales, but to be honest, nothing to write home about.

Is it worth the time?

In the beginning, I put in a lot of time. Today I schedule the posts ahead of time so that does not take too much time at all. I do jump on Twitter pretty much daily for a few minutes to answer questions and comment on feedback and retweets.

It is creating brand awareness for my site, and it does generate some targeted traffic. Could I’ve spent my time doing other things with the similar outcome? Sure, but at this point, I will continue using Twitter sparingly.

I don’t believe the answer, to the question is Twitter worth it, is as easy as YES or NO.

There are too many factors that play in.

It also depends on your niche. Some niches will work better than others.

The only true way to find out if it’s for you or not, if it will benefit your blog or website, is to give it an honest go. Find out for yourself!

I will not be as involved with Twitter going forward as I have been, I will still continue to tweet and engage but spend less time doing so. I believe in using multiple traffic streams and I will continue using Twitter as one of them. I will maintain what I’ve built up with Twitter but it comes down to WHERE and HOW you spend your time…

This year, my social media challenge will be Pinterest. Will that bring in decent traffic and hopefully sales for my blog? We’ll see to be continued…

Have a creative day,