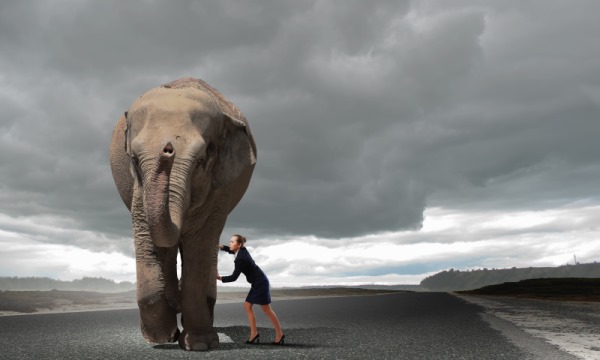 Leave no other option on the table than to make it happen.

What ever it is you set your self out to do, you can make it happen.

Break the elephant down into smaller bite sizes and you can make it happen.

A few weeks ago I ran into an elephant, I had no idea how to get my self out of the situation but with small bites I made it happen…

It was a Sunday afternoon, me and the kids were getting ready for our trip to Sweden. We were all very excited. My husband took us to the airport and since he was not going this time just dropped us off. We have done the trip, US – Sweden, many times since that`s where I`m from. This time though it didn`t go as planned…

We walked up to the check in disk, I handed the passports to the friendly lady behind the desk. She looked at the passports and said, we have a problem…

-Your son can`t travel on his passport.

-His passport is valid but it`s not good for the extra 3 months that`s needed.

After a long discussion I realized that they would not let us check in and let us on that airplane. The kids were upset, they were looking forward to seeing their grandparents and cousins in Sweden.

My dilemma now was how do I get a passport done for my son as soon as possible? The task felt overwhelming, I had no idea were to turn and who to contact.

The check in staff at the airport were nice and friendly and rebooked our tickets for a few days later but they didn`t really know how to fix the passport issue.

It was Sunday afternoon so we got hold of nobody, I felt overwhelmed and had no clue what to do.

I had a phone number and a couple of days to resolve the issue.

Past experience getting a passport were not good it took a few months, so at this point I was scared that a few days would not be enough to get a new passport for him.

I knew one thing and that was that somehow, we will be on that plane booked a few days from now, going to Sweden.

The only way to do it was to break down the elephant into bite size tasks. The first one being to call the number I had gotten, first thing Monday morning.

Thinking back when I started my online business I felt overwhelmed as well, I felt like I took on an elephant. I had no clue where to start or where I wanted to go.

I knew what I wanted I just didn`t have the tools or program to make it happen, yet.

When I found a step by step program that showed me HOW to do it, I could break it down into manageable tasks and over time I have gotten control over the elephant.

The unknown can be scary but also very exciting if you know what you want the end result to be. For me that was to be able to work from home, spend time with my kids and make a descent income. That I do today.

As far as the passport issue, that got take care of as well. We got an appointment at the Passport Agency in Buffalo NY. They helped us get a passport within a day. A day later we were on that flight, going to Sweden.

When we finally got there we had a fabulous time.

So be sure to break down the elephant, check the expiration date of your passport and take on the affiliate marketing challenge if you have been thinking about it.

I would love to hear about your elephant, feel free to leave a comment below,

Have a productive day and a great week!

See you next Friday,